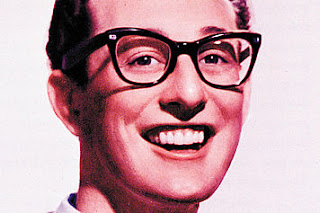 Today would be Buddy Holly's 75th birthday had the genius rocker not plunged to his death in a plane crash at age 22. He's been ranked as one of the greatest artists of all time and was one of the first inductees into the Rock and Roll Hall of Fame. Buddy was one of the singers that my mother and I would listen to when I was little, and so it's often her voice I hear singing along when I'm rocking the "Best of" collection in my car.

The Buddy Holly Center
A historical site with dual missions; preserving, collecting and promoting the legacy of Buddy Holly and the music of Lubbock and West Texas, as well as providing exhibits on Contemporary Visual Arts and Music, for the purpose of educating and entertaining the public.

Artsy Buddy
Check in on what the fun and varied crafters at Etsy have been doing with Buddy as their inspiration.

First Listen: "Rave On"
An impressively diverse collection of takes on the innocence of another era. Listen to a few of the tracks, including the Modest Mouse cover of "That'll Be The Day," here.
- September 07, 2011

Email ThisBlogThis!Share to TwitterShare to FacebookShare to Pinterest
Labels: death