Can You See Me: Invisible Disabilities and Discrimination

Margaret* is a kind woman. She is creative, loves animals and helps raise awareness of the diseases that affect her and the people she loves. In addition to sharing my diagnosis of fibromuscular dysplasia, Margaret also has pulmonary hypertension and diabetes. Her pulmonary hypertension specialist worked with her to file — and have approved — the state's official paperwork so that she could obtain a permanent handicap parking permit.

But when Margaret went to the post office on Thursday, she experienced something that those with invisible disabilities unfortunately are all to accustomed to — discrimination. At the post office, an employee remarked that if Margaret was handicapped, she needed to use a cane.


"I felt a mixture of emotions," Margaret said. "I was sad that someone would say that to me and make me question getting the permit in the first place. It was a hard thing for me to do to come to the decision that I needed to apply."

In Margaret's state, the qualification for obtaining a handicap parking permit fall under definition of a disabled individual. A person who has a cardiac condition with functional limitations according to American Heart Association standards is the very first item on the list of qualifications followed by those with respiratory conditions. Neither cardiac conditions nor respiratory conditions are visible — however they are no less real.

"I was sad that in some peoples' minds, one can only be be disabled if it is seen," Margaret said.

Only two of six of the state's qualifications for a handicap parking permit are those that can be readily seen and most commonly associated with disability — a person who has lost an arm or leg and does not have or cannot use an artificial limb; a person who cannot walk without the aid of another person, a walker, cane, crutches, braces, prosthetic device or a wheelchair because of the disability.

What are those with invisible disabilities to do?

Bringing about more awareness of the term invisible disability is a start, and doing this must address the public's habit of making sweeping assumptions. A person looks at another person and, based on outward appearances alone, makes a judgement. Chronic illness patients are all too familiar with variations on the frustration refrain, "But you don't look sick." Perhaps we don't. Perhaps our outside has not deteriorated like our inside. Perhaps we're out and about because it is a good day and we don't look or feel as sick as we are. The fact of the matter is that no one knows another person's full story, and no one can ascertain the full story based on appearances alone.

When I was 25, I had triple bypass surgery. To explain the need for the surgery was enough of an endeavor — no, it wasn't heart surgery... no, it wasn't gastric bypass... yes, the doctors think I have a vascular disease... no, it's not due to a bad diet... no, it's not contagious. Even in the hospital, I was an anomaly in the vascular ward. Outside the hospital, when I finally was recovered enough to leave the house, my gauntness, slowness and bruised arms drew concerned and suspicious looks. Out to a restaurant for dinner one evening, my parents ensured I got a seat while we waited, which I did not give up when an elderly lady came in — an action that mortified my own sense of decency and, I'm sure, the others around me. But I felt as if had no choice. My need, though invisible, was great.

I found myself in similar situations after having a stroke at age 28. I'd come home from the hospital with a walker. My foolish pride led me to leave the walker behind and instead cling to my husband's arm for balance when I had to go out in public. I was slow as molasses getting from one place to another. I went out of my way for ramps and railings to sturdy myself. It was the first time that I ever truly contemplated the Americans with Disabilities Act and realized how much more needs to be done to provide adequate accommodations.

The vast majority of my stroke's effects were invisible, save for the drooping of my left eyelid — a physical feature those who are unfamiliar with stroke would fail to associate with its cause. My dogged persistence to appear "normal" made things harder than they had to be. Expending so much effort trying to keep up and keep my disability not only invisible but a non-issue was exhausting to the point of tears.

That exhaustion is the risk that those with invisible disabilities face. If others do not see our disabilities as real, there is a tendency to play into the illusion. We don't want to seem a burden. We push ourselves too hard. We feel embarrassed to make use of our accommodations. And all our effort pretending — for others' benefit — that our invisible disability really isn't even there leaves us alone and suffering later when the job is done or the party is over and we overdid it because no one sees how we feel.

Those of us with invisible disabilities must stand up for ourselves. If we can not be seen, we must at least be heard. We must speak out against discrimination and educate the public about the damage done by assumptions based on how we look. It's not about how we look. It's about who we are. And we are in this together.

Alex dialed the number. "Hey, Dad. I've got a real heavy patient load today, so I wanted to go ahead and call because I didn't know when else I'd be able to reach you."

The Seimens whirred softly in the background, its automatic imaging sequence well underway. The patient, tucked under warmed blankets, smiled.

The patient kept infinitely still, breathing regularly but so as not to disturb her position.

"Okay. I'll see you then, Dad. Bye," Alex said, putting down the phone.

The Seimens continued to scan the patient's heart. Perfusion—a test to see how much blood the heart is holding at rest and after stress. What about the heart that scans the patient heart? That heart under stress, how much can it hold?

"Pshew! Wow. You didn't move a muscle did you? Great pics!" Alex said.

The patient rose from the table and settled into her wheelchair. Alex folded one blanket in half and spread it across the patient's lap. Then he trekked across the unit to the closet where the blanket warmer was kept.

"Lean forward just a little," Alex said to the patient. He draped the warm blanket across the patient's shoulders. "We'll get you finished up down here and back upstairs to get something to eat."

The patient was wheeled into another room. A chemical stress test was induced. The patient was returned to her room in the observation ward. She was, after eleven hours, allowed to eat. The patient rested. Her father and mother and husband arrived. The cardiologist came. He spoke of ifs and thens. The patient was summoned for her second set of scans.

"Did you get something to eat?" Alex asked as soon as he saw the patient's face.

The patient smiled. She settled down on the table with her arms resting above her head. Again, warm blankets were tucked around her. Again, the Seimens began to whir. Otherwise, it was quiet. The patient was relaxed.

"How much longer does this thing have?" she asked in a low voice.

"Six and a half minutes," Alex said with concern in his voice. "Why?"

"Oh, yeah, if you fall asleep, you might jump when you wake up. I could sing to you, but they'd probably fire me for torture," Alex said.

"Tell me about your dad." That's what the patient should have said. Alex's Father's Day was spent with a surrogate family, a family of wounded hearts in need, hearts made perfuse, at rest and after stress, with his care.

Let Me Hear You 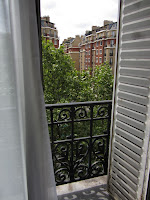 Through the open window of my fourth flour Paris hotel room, the sounds of the city never ceased. In the wee hours of the dawn, delivery trucks opened and slammed their doors, engines rumbling about from stop to stop. The policeman with his incessant whistling cued the morning commute, commanding traffic in time with the busy intersection's stoplights. Gangs of Paris metro riders swelled from the underground, crowding the sidewalks with voices. The cook at the crepe stand called customers' orders back to them as he poured batter onto his hot griddle. Two dings sounded as the tram approached and the clicking of high heels clipped along more rapidly in order to board.

Each noise verbal or non-verbal was a communication, an indication of moving, of doing. To listen to it all at once was cacophonic, like the tuning of a symphony or the static from a radio. Yet a keen ear dialed in each sound as its own. Discordance transformed into dialogue, revealing a constantly changing conversation that charged the city's occupants to participate, to integrate their lives with millions of others.

Noise is what lets us know we are not alone.

ePatients are healthcare's noisemakers. We share. We disclose. We reflect and analyze. We reach out with the hope that what is within will connect. We give voice, which in turn grows our chorus. Listen. Listen to what we are singing. Our chorus sings a mighty song in an inverted key — we have shifted, we can rearrange, we will bring about change.

Listen. Listen and join in our song. Be it in harmony, be it in discord, sing. It is the sounding of the voices that is important. Our voices charge healthcare system occupants to participate, to integrate, to consider the lives of millions of others.
- June 02, 2012 No comments: