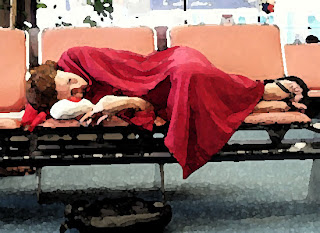 When I was younger and more limber, I liked flying. These days any trip longer than two hours feels like an eternity. Coming back from San Francisco on a redeye flight was an eternal hell. We left San Fran at 11:30 p.m. (2:30 p.m. East Coast time) and arrived in Atlanta at 7 a.m. There was a screaming toddler on board, and my restless leg syndrome was acting up, so there was no sleep to be had. Once at the gate for the flight from Atlanta home, we—dignity be damned—passed out cold on a row of chairs for an hour only to be awoken by the rising din of waiting passengers and giggling flight attendants. Someone make me a millionaire so I can fly first class next time.

The Guide to Sleeping in Airports
Why spend money on a night in a hotel when an inflatable raft on the airport floor is free? Sure, it may sound a little cheap and degrading at first, but read-on and you'll soon discover a travel community that (for almost 15 years) has been sharing their airport sleeping experiences and travel advice with fellow airport sleepers around the world.

How to Sleep on a Plane
With the closed-mouth solemnity of a dignitary lying in state, airplane sleepers seem to me shamanistic. They’re at one with the Virgin Atlantic or JetBlue heavens. In the passenger murmur, overhead beeps and engine hum they hear a lullaby.

Pilot Fatigue
In the past 20 years, more than two dozen accidents and more than 250 fatalities have been linked to pilot fatigue, according to the National Transportation Safety Board (NTSB).
- September 21, 2011

Email ThisBlogThis!Share to TwitterShare to FacebookShare to Pinterest
Labels: sleep