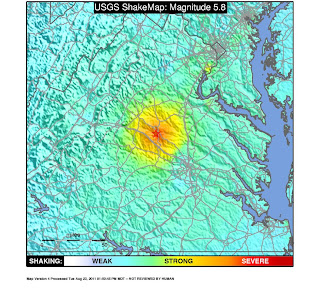 A 5.8 magnitude rattled the majority of the East Coast today. I missed it—it was the afternoon and I was napping. The quake originated near Richmond and was the biggest to hit the area since 1897.

I was in Switzerland when I experienced my first quake. The guy I was dating at the time lived there, and my 19-year-old heart ventured across the ocean to the land of chocolate for the Christmas holiday. Beginning the day I arrived, it snowed for nearly four days straight. Subsequent conditions were wonderful for learning how to snowboard—it doesn't hurt to fall in four feet of powder.

So much snow was amazing, but it also made me a bit nervous. The Alps seemed like a good place for an avalanche. Suffocating in a pile of snow seemed like a miserable way to die. I had forgotten my gloves one afternoon as we loaded up the car to head out to the slopes and was alone inside the small apartment building's hallway when the walls began to shake. There was nothing I could do but stand still and wait. If an avalanche was coming down the mountain, being inside the building was my safest option. After 30 seconds or so, the shaking stopped. I waited for any sort of noise or movement. There was nothing. I grabbed my gloves, peeked out the front door to see the waiting car, shrugged my shoulders, and stepped outside. As I crammed into the Subaru's backseat the four other occupants all turned to look at me with suspicion. "We you shaking the car?" my boyfriend asked. "Not unless you were shaking the house," I replied. The earthquake's epicenter was about 20 miles away, and no damage was reported.

The Switzerland experience prepared me for another tremor in 2005 in Western North Carolina. I was on the phone with my then-boyfriend/now-husband when a loud and low sound permeated my townhouse and the shaking began. "Whoa... do you feel that?" I asked. "Feel what? Oh!" came his reply as the quake traveled the 10 miles or so between our two homes.

I remember learning in grade school that our mountains are on a major faultline and that the area was quake territory; however, I don't recall a single quake throughout elementary, middle and high school. It's only been since I've lived here as an adult that the quake activity has been great enough to notice. And notice I have. What does it mean? Why are the faults shifting? Do I really want to know? Since the Virginia quake at 1:51 p.m. the USGS has registered seven additional quakes around the world—including a 4.2 aftershock and a 5.2 in Papa New Guinea. Colorado also had a shaky day with a 5.3 at 5:46 a.m. followed by seven aftershocks so far. Maybe it's time to review our insurance policy.

Latest Earthquakes in the World
Learn about all earthquakes with magnitude greater than 2.5 located by the USGS in real-time.