There's Something Wrong With Us, But We're OK With That 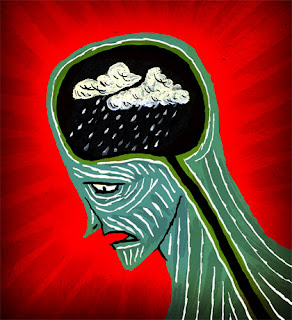 I was reading old posts from the Houston Chronicle's Good Mom/Bad Mom blog featuring Jenny Lawson, the wonderfully deviant author of her own separate blog, The Bloggess (Like Mother Teresa, Only Better). Jenny's very first Good Mom/Bad Mom post was an introduction in which between the lines was a surprisingly honest account of herself. In short, she identifies herself as a mother, a wife to a husband who refuses to donate his organs for fear of needing them when he becomes a zombie, a Czech redneck, and one who suffers from anxiety and from time-to-time goes off her meds "just to see if I’m still crazy. Turns out? Yeah."

Although she doesn't know it, Jenny has become my new best friend. In similar form my biography would indicate that I am a mother to three cats and one dog, a wife to a husband who refuses to donate his organs because he's an asshat, a Czech redneck, one who suffers from anxiety and from time-to-time goes off her meds "just to see if I’m still crazy. Turns out? Yeah." It's like we were separated at birth, which makes more sense than having been separated at any other time since I've never actually met Jenny and so far our only correspondence has been me offering her a writing job and her turning it down in order to work on her book. I'm supposed to be working on my book right now too. Well, technically I gave myself a 2012 start date, so I guess I've still got a few months until I'm really procrastinating.

Where have these women been? Why did I not know that other such women exist? Why can these women not live in my town and spend copious hours with me being snarky over coffee and/or drinks?

I don't like women, which is problematic because I am one. The vast majority of my 31 years has been spent thinking that women are silly and vapid. Perhaps it was a matter of age. As a youth, I tended to socialize and converse best with people much my elders. As a young woman, it was easier just to drink beer, eat chicken wings, and talk sports than to pretend to give a flip about fashion or my weight or babies. It's only been recently that I have begun to meet women my age who impress me with their wit, talent, and intelligence. I'm not sure if we've just all grown up, or if I'm somehow keeping better company, or if (fingers crossed) the really stupid women are too busy putting on mascara while driving and coming to their timely demise thus leaving the rest of us to congregate. It has been at once a relief and absolutely terrifying to find these women with whom I connect because I finally have friends that actually matter.

However, both Jenny and Nymph raise another matter that is near and dear to my heart—mental health. I was first diagnosed with depression as a freshman in college. All I knew was that I wasn't feeling well, hadn't been eating much, and had had an upset stomach for weeks. I went to student health between classes. They took one look at me and wouldn't let me leave. I had to call my professor to tell her that I was being held hostage and that the doctors wouldn't tell me why. They ushered me upstairs to a shrink. Honestly, I remember nothing of the conversation, but apparently if one looked up depression, my picture would have been next to the entry. It happened that my parents were in town to visit, and I was late meeting them. I didn't know how to tell them about my diagnosis. I felt ashamed, broken, insufficient. We went shopping, and I managed to get a few moments with them individually to break the news. It went better than I expected, but I don't think that at the time any of us grasped the situation's seriousness.

Over the next year I struggled with my mental and physical health, made some bad decisions, didn't do too well in classes, and came home for the summer beaten. It was a time for reflection, and I decided that I could wrangle my thoughts best off medication. I broke off a bad relationship, excommunicated several "friends," and finally went back to school in August with a better head on my shoulders. Amazingly, I made it through college without much else incident, but the depression came roaring back after graduation when I moved to South Carolina for my first job as a reporter. The job was H-E-L-L, I lived alone, and there was no time to do anything but work. When I began truly contemplating losing my job in favor of staying in bed curled into a tiny ball with my back against the wall, the covers over my head, the doors locked and the lights off, I figured it was time to see a therapist again—maybe. Other staff members at the newspaper recommended one in particular, but perhaps I should have taken it as a sign that I was in the wrong profession or at the wrong place when the local shrink offered our company a group discount. My first visit I spent talking to the therapist's dog and rubbing its ears incessantly. I quit that job on my birthday in 2003 and moved back to North Carolina to work at another newspaper.

Fast forward to 2005, I had tried both Zoloft (awful) and Paxil (better, but meh), but again gone off any meds because frankly its hard to be a writer and be medicated. There is something beautiful about being crazy. Misery breeds creativity, at least it always has for me. On meds, I felt muffled. Off meds, I was a wreck, but my writing was good. Bad health forced me to have triple bypass at age 25. An eight-hour surgery performed to save one's life is, to put it blandly, a life altering experience. To complicate matters, doctors thought I might have an incurable arterial disease. The surgery was so invasive (read: they literally cut me in half) that I was incapable of doing anything significant on my own for months. I was relatively okay with all of that. What I wasn't prepared for was that the surgery would work. For as long as I could remember I was unable to eat with any regularity due to decreased blood flow to my guts—the reason the bypass was needed. With the bypass, suddenly I felt good, I could eat, and I didn't know what in the hell to make of that. My body was not my own anymore. It was this strange thing with which I was completely unfamiliar. I was lost.

Through the grapevine, I heard of a local therapist who specialized in patients who had major heart surgery. I was overjoyed. Though my bypass was not coronary, I had little better chance of finding someone who understood the mental and emotional effects of my surgery. I drove for an hour each way to my appointments. We talked. It helped. The therapist told me about a new drug called Lexapro. I tried it. It has been my magic friend now for nearly five years. I love it because, for the most part, I do not know I'm taking it. For me, it does not produce the same side-effects as Zoloft or Paxil, which both seemed to lessen the highs and lows by making me feel nothing at all. There is a part of me that would still like to be off medication, but now I am a wife, and I feel it is part of my responsibility to not actively engage in behavior that makes me impossible to live with—i.e. not taking my meds. Sometimes I slip. Sometimes I fall off the bandwagon. Sometimes my husband finds me in a dark room, unshowered, surrounded by food debris, and sleeping. He tries his best. "Are you okay," he asks. He lets me lie to him. And he lets me cry on him.

The point is this—Jenny and Nymph both are writing about the darkness of their diseases, and here I have tried to do the same. These diseases, and others, need not live in darkness. It is through exposing them that we take away some of their power, through sharing that we find like souls, and through difficult, sometimes painful work that we begin to heal and make peace. Whether Jenny and Nymph ever know that I exist, I at least know that they do, and that helps me feel less alone.