Eighteen days - that's how long FMD Chat, a fledgling nonprofit organization dedicated to those affected by the rare disease fibromuscular dysplasia, has left to raise $1,274 more dollars in order to reach its MedStartr goal of $5,000. Why do I care? Because I have fibromuscular dysplasia and FMD Chat is my organization. FMD Chat relies on social media to connect patients around the world with the peer-to-peer support that makes living with a rare disease less of an isolating experience.

What is MedStartr? MedStartr is a crowdfunding platform specifically designed for healthcare. It's like Kickstarter, but not. It has given FMD Chat access to a group of potential donors who would never otherwise know about or have interest in contributing to a small group of rare disease patients. However, many donors still remain "potential" donors and the small group of rare disease patients still need donors' support. If FMD Chat does not meet its $5,000 funding goal by Sept. 7, then the project fails and all the money raised goes back to the donors.

In order to help raise awareness of FMD Chat and its goal, I have taken up the tactics of public radio's listener support fund drives—nineteen days to meet our goal, nineteen posts to show you what it's been like, and what it continues to be like, to be me, a patient with FMD. Today, marks day two.

WARNING: it's going to get graphic.

DON'T WANT TO SEE IT: help FMD Chat reach its goal before I get to the emergency surgery pics.
Day 2
This is my neurologist's office.
I have been his patient since April 2008.
At age 28, and after three days of an intense earache,
I suddenly was overcome by dizziness.
An ambulance was called.
I don't remember much of the next 24 hours.
Despite pronounced Horner's Syndrome,
the hospital doctors said that I had vertigo
and that it would go away as quickly as it had come on.
They were wrong.
It was at home that I discovered I had
lost my senses of pain and temperature on my right side.
Concluding that this was abnormal,
I made an appointment with my family practice doctor.
He too concluded that something was wrong
and referred me to the neurologist.
My neurologist, diagnosed an ischemic stroke.
More than four years later,
I still have deficits.
More than four years later,
I see my neurologist at least twice a year. 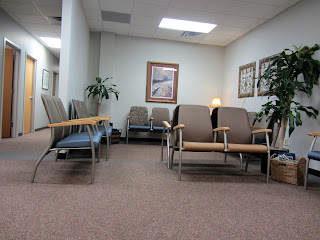 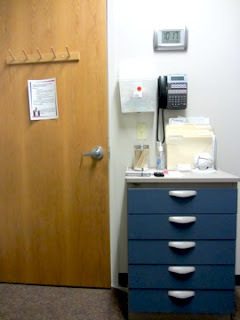