Being Mindful With the Munchies, and Learning to Say No to Sugar 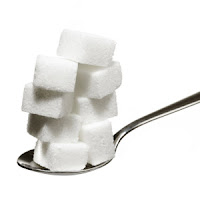 It has been one week and one day since I began the concerted effort to be better to my body. Using MyFitnessPal, I am tracking my food intake—an exercise that has been a true wake up call. By tracking what I'm eating, I have discovered how much I was over-eating. If one is not careful, it takes no time at all to rack up 2,000 calories in a day much less 1,500 or less, which is my target. I'm measuring now, paying attention to serving size. Instead of bringing the box of Reduced Fat Wheat Thins to the table as I write this, I counted out 16 of them—a serving totaling 130 calories—and snacked. Normally, I probably would have mindlessly munched hand to mouth until half the box was gone. Half the box would be 585 calories. .. as a snack. No. I get a serving.

My usual diet has never been too bad in terms of what I ate. I love fruits and vegetables, rarely drink sodas, and go easy on the meat. I'm not overly keen on fast food, though I'll absolutely admit to loving pizza and falling prey to a few chicken sandwich combos, which can be worse than a traditional burger. But most of all... most of all... I love carbs and sugars. Bread, crackers, chips, pasta, cookies, cakes, pie, candy—I want it all. What I've discovered is that carbs and sugars are like a drug for me, and having them only makes me want more of them. This realization came just as the San Francisco Chronicle featured an article about researchers argument that sugar "should be highly regulated with taxes, laws on where and to whom it can be advertised, and even age-restricted sales." While such an approach may seem extreme, I do agree that more must be done with nutrition labels to increase public awareness of sugar intake. Overall, nutrition labels are too small, too innocuous, and purposefully deceitful. Candy bars and cookies are a wonderful example. Nutrition labels are tucked under packaging flaps, and while calories are listed, they are listed per serving and only upon closer inspection does one realize that a serving is one cookie or half a candy bar. Who eats only one cookie or half a candy bar?

A problem with sugar in particular is that it's sneaky. The 170 calorie breakfast shakes I bought kick in a whopping 17 grams of sugar of the 24 grams that MyFitnessPal has set as my intake limit. The clementines that I love so much and eat two of at a time contribute 13 grams of sugar (at least it's natural) with 80 calories. The fruit and cereal snack bars I bought each have 9 grams of sugar, though only 90 calories. The oatmeal cereal itself has 9 grams and 250 calories with skim milk, but the Raisin Bran, the sneaky sneaky Raisin Bran, has 17 grams of sugar along with its 230 calories with skim milk. Consequently, I have been vastly exceeding my daily limit. The good thing is that by tracking what I'm eating, I'm learning what I'm doing right and where I need to work on improving.