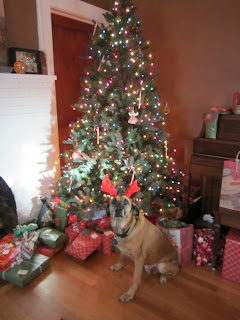 I'm sick. It seems to be nothing more than a run-of-the-mill Christmas cold; nonetheless, when I made it home yesterday afternoon, it was all I could do to strip down and crawl directly into bed. I slept until my husband got home from work and awoke only enough to request medication. Since I'm not allowed to take pseudoephedrine or ibuprofen—which puts most cold medicines off limits—there was nothing in the house to suit the situation. The hubs went out to procure both drugs and dinner, returned home to dope me up and dine, and really that's the last that I remember until about 5 a.m. As I rolled out of bed, my foot landed on something soft, warm, and hairy. Our hound dog, Bruce, who normally sleeps on his fluffy bed in the living room, had curled into a tiny ball on the floor by my side of the bed.

I didn’t mean to adopt a hound—at least not a barrel-chested, stick-legged, long-eared, musk-smelling hound. They told us he was a Norwegian Elkhound and Golden Lab mix. Golden Labs are reliable, if not overtly friendly dogs, and I’d known a Norwegian Elkhound at the horse stable where I rode as a teen. He was protective and fiercely loyal to those of us he saw on a regular basis. As I held that squishy double handful of puppy in my hands one late winter day, I was hooked.

My husband didn’t want a dog. He was fine with other people having dogs; he just didn’t want us to have a dog. I was persistent, or perhaps I was simply annoying, and in that our first year of marriage, my husband caved. As we filled out the adoption papers, our puppy lolled in a sweet sleeping puppy coma, exhausted from playing with his six other brothers and sisters. That would be our last moment of peace for the next year.

While my husband and I had both had dogs before, we had never been responsible for the raising of one. Bruce, as he was named, was more than we bargained for — even at rescue adoption prices. He never … ever … ever … ran out of energy. An hour at the dog park wasn’t enough. No amount of destroying stuffed toys was enough. Electrical cords were tasty treats. The three cats were horrified. Six living beings were too much for our little townhouse. There were tears shed and serious discussions as to whether or not we’d screwed up, whether we needed to find Bruce a new home. Even after we bought a new house with a fenced in yard, Bruce drew my husband’s ire by digging holes – a telltale sign of his then abundantly obvious hound traits. The breaking point was one night when Bruce chewed a hole through my husband’s Carhartt jacket. I made an online plea — “Save My Marriage, Adopt My Dog.”

But as much trouble as Bruce caused, I loved him. He and I had a bond, and that night as we sat on the sun porch steps with our heads pressed together, my husband saw us. With a sigh he said, “You don’t have to give away your dog.” So Bruce stayed, and tried harder to manage his energy through training. For all his faults, Bruce was never stupid. He knew no, sit, shake, down, stay, move, and my personal favorite leave it/take it in which he would lie on the kitchen floor and I would balance a treat on each paw, making him wait for my command, drool not withstanding, to gobble up the goods. “Leave it” also worked in regards to the cats, socks, and dropped non-food items.

By age two, Bruce showed the makings of a real dog. He also ate an entire bar of Dial soap and learned how to steal a full beer from a camp chair cupholder. By age three, we figured he had to mature sometime soon. Friends with hunting dogs pegged him as a Black Mouth Cur and Plott Hound mix. By age four, he played patiently with our six-year-old niece who spent the whole of Christmas taking his rawhide and hiding it another room.

Bruce turns five in January. He’s scared of our cat Penelope, fireworks, lightning, gunshots—both real and on TV—and the dark. He’s just the kind of hound that most hound owners wouldn’t want, but he’s just the right kind of hound for me.
- December 22, 2011