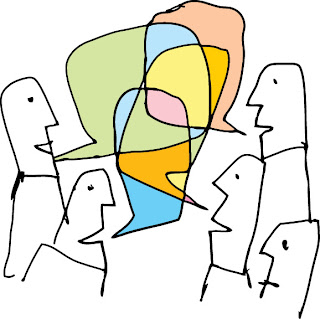 I will be the first to tell you that I was slow to get on the social media bandwagon. Heck, I eschewed technology in general. My iPod mini—the one that came out in 2005—was a gift. I refuse to buy a new one because my little green, black and white screened one still works, and really I don't use it that much. I still buy CDs for the most part. I do not have a Kindle or the like. I prefer real books. My phone is a feature phone.

However, this year it seemed that I couldn't much ignore the technology going on around me. I stopped driving a stick shift Subaru and bought an automatic Scion, which has a USB port and a kickin' stereo, so I bought two eight gig jump drives to hold my music—I load them using my 2006 MacBook, and my iTunes is filled with music from my own CDs, save for podcasts of This American Life and Prairie Home Companion the very existence of which I find ironic. We finally got a flat screen TV earlier this year—it was an open box deal, and the high pitched whine of the giant lurker in the corner had just gotten to be too much, but we won't pay for HD cable. I traded my PlayStation 2 that I never played for a Wii that I never play. My husband and I received a TomTom GPS unit as a gift, and I'll say we like that when we travel. I love my new Canon PowerShot SX 230HS because it doesn't take four AA batteries like the model we replaced.

So with all that personal technological progress, it was no real surprise when I also joined the Twitterverse. Granted there were two work accounts that I was part of managing. We created the accounts because we felt like we had to create the accounts—not because we wanted them or knew what to do with them. Each account has a couple hundred followers and is listed. I created a work account for myself, again because I felt like I should, like it would help boost our presence. My Tweets are rather devoid of personality and engagement seems low, though again there are a couple hundred followers, and I'm on a few lists. Our HR rep was kind enough to create an account too. She seems to alternately enjoy reTweeting my Tweets and heckling me.

Then I wrote a blog post. I'd been blogging in one form or another for a few years, first on MySpace (ha! remember MySpace?), then via notes on Facebook, and then via this blog here. Blogging has been a more natural outgrowth because writing is my profession. It is how I earn money and how I blow off steam and get out what's in my head. I began this blog to address issues that came up in my first year of teaching. But since I am also a chronic patient, personal health matters crept in from time to time. And I like to garden. And I am a wife. And I care about the environment. And so many things. Defining myself is difficult. Editing myself down is difficult. And I blogged about that. And the next day, AfternoonNapper was born.

AfternoonNapper is an attempt to separate out some of my interests and identity from the rest of my interests and identity. AfternoonNapper likes, above all else, naps and particularly those in the afternoon. She also is a self-proclaimed health activist in that she cares passionately about improving healthcare and patients' ability to communicate with their doctors, caregivers, and selves. AfternoonNapper also likes to be a little snarky and amusing. She may—may— have Tweeted a comment at Stanford's Medicine 2.0 about BJ Fogg needing to get more sleep so that he'll look better while swimming naked, which is only a joke that those at Medicine 2.0 will get—but trust me, it's EXACTLY the kind of thing that someone should Tweet in reply to a keynote speech by a Stanford professor and behaviorist of great renown.

It was the creation of AfternoonNapper that led me to Stanford. I learned of the conference scholarship through Twitter. I connected with fellow ePatients and scholarship recipients through Twitter. Twitter has opened up my world to an amazing wealth of knowledge as I discover doctors and patients and health organizations who are doing cool things and working to change the world. Even though the insights comes in 140 character blurbs, they can be profound. I have made more truly useful connections via Twitter in the few short months I have been using it than in years of MySpace and Facebook put together. Who knew? That said, Facebook has recently been of great emotional support because it has allowed me to connect specifically with other fibromuscular dysplasia patients and message back and forth with them on a more personal and detailed level.

The lesson to be garnered is this—don't discount social media. Yes, it's got a bad rap. Yes, there is a ton of wildly unreliable information floating around out there and social media promulgates it. Yes, there are mean and ignorant people who using social media to spew hatred and fear monger. Yes, texting language will make your brain rot. But when used for its highest and best purpose, social media is amazing. It allows our words to reach beyond our communities. It allows others' words to reach into our communities. It is our responsibility to make sure that we capitalize on social media's highest and best use. We must each take on the task of ensuring that what we're putting out there is adding to the dialogue. (Or telling a good joke. We can always use a good joke.)

The very ability of social media to connect us with like minded people is its flaw. It is easy to converse with those with whom we agree, and so we very well find ourselves preaching to the choir. Social media allows for a larger collective of opinions—agreements and, more importantly, disagreements that serve to awaken the thought process, illustrate differences, and highlight areas where additional discourse is needed. Though we can not ensure that those on the opposite end of our spectrum will listen to us, we can at least listen to them and use their arguments and ideas to shape our own; just disagreeing with someone doesn't mean that all their points are invalid.

Therefore my challenge is this: get someone new into social media. At Stanford, the focus was on the role of social media in healthcare. Many doctors and ePatients were ardent advocates of using social media. Many were ardently against it. For this group, I say—try it. Start a Facebook page for the practice. Offer tips on eating well, updates to billing practices, even pictures of the trees outside the office front door changing colors with the season. Start small. Start somewhere. Get on Twitter. Even if you don't Tweet, follow those who do. Outside the health community my challenge is much the same—bring someone new to the social media table. Run a non-profit organization? Let your volunteers Tweet about why they got involved. Own a design business? Tell folks about how good design is not as available to those in need as it is to the wealthy. Information is more accessible than ever. We must ensure that information has meaning.
- September 26, 2011