They say my grandmother used wait on the stoop of the family’s crackerbox house in Southside Chicago and watch as my father walked to school to see if he would get in a fight before he got to the end of the block. The eldest son of a Polish steel mill worker who dropped out of high school, my father was on the wrestling team and cleaned the inside of tanker trains. But he was smart. He liked science and math, went to college on a scholarship, majored in economics, and went on to Cornell Law School.

As a lawyer, he represented the incarcerated’s rights at the state department of corrections, practiced defense in the state supreme court, and became chief legal counsel at one of the state’s 16 public universities. He helped build houses with Habitat for Humanity, served midnight breakfast to college students during exam week, and tutored his daughter who did not inherit his aptitude for science and math. He taught constitutional law and never once found himself on the wrong side of the law save for a speeding ticket or two. Upon his retirement, he was vice chancellor of technology transfer as well as chief legal counsel and one of the university’s most senior and respected staff members. One could say he did all right.

He did all right by mom and me too. Ever a man of his word, if dad said he was working late, he was. He saved for family vacations by eating a sandwich at his desk for lunch everyday. He kept the official score book at my softball games, sitting on the bleachers in his suit and tie, and bought, arranged, and delivered 40 long-stem roses to my mom on her 40th birthday.

My father’s faults I’ve come to understand more as I’ve grown older — not simply what they are (any teenager will tell you what’s wrong with her parents), but why they exist, how they influenced me, and which ones I too carry. He gets angry when he’s scared and feels out of control. He’s somewhat emotionally awkward and expresses affection by trying to foresee all possible problems, caution against them, and devise a plan to prevent them whether he knows what he’s talking about or not.

I don’t have his temper. Being in situations in which my life has been on the line taught me a lot about what’s really worth getting worked up over. I am more spontaneous, often to his ire.

He became more than his humble hand foretold, and he achieved that goal while always taking the ethical path. For that I admire him greatly. For instilling that same sense of ethics in me, I am thankful. And it is his grit, his drive, his call to service, his belief in doing what is good and right that have become my own.

From age 24 to 31, I underwent triple bypass surgery, suffered a stroke, lost my left kidney, had four brain aneurysms repaired, and survived a gastric rupture before I was diagnosed with a rare variant of a rare disease called intimal fibromuscular dysplasia. Its cause is unknown. There is no treatment. Such things might crush some people. I, on the other hand, persisted.

Throughout my period of survival, I learned so much both practical and personal, and I found a calling in patient advocacy. I became an advocate because I could use my pain for the good of others.

As my leadership role grew, I felt I lost my place as a member of my patient community. It seemed that I could not ask those who looked up to me for the support I needed. My professional distance actually isolated me from what had drawn me into advocacy — my fellow patients.

The kind of leader I want to be has a heart, and honestly I lost touch with mine. Putting my head over my heart had been critical to my survival — a learned coping mechanism. Similarly, my style of leadership came to be, at least outwardly, impenetrable. I strove to be judicious and fair, analytical and unflinching. I cultivated that well, so well that somewhere along the way I began to lead only with my head, and I sequestered away my heart such that it could not betray me.

It was a fellow patient willing to give me a proper shaking by my emotional shoulders who brought me to the realization that in order to be a good leader, I can not lead only from my head, and that the opposite is not to lead only from my heart. I am pursing training so that I may learn to balance both, re-establishing fellowship to rekindle the passion I know lies within me, and kindling the belief that I can become the leader I’ve never had — the kind I would follow into battle, the kind with whom others hope to work, the kind who teaches others how to be good leaders too.
- February 28, 2017 40 comments:

Everything Is What You Make It

Lead. Be kind. Help others.

We need some good news. We need to set the tone for 2017. And we have power to control it. We have the power to be better than decent and spread it around. As we do so, we demonstrate to others how we want to be treated.

Perhaps my request is simplistic and hokey. Or perhaps believing it to be so is indicative of the current state of things — that somehow we've come to see being kind as a silly waste of time. There's a culture of "I'm going to get what's mine" that has pervaded our lives. It comes from competition. It comes from struggling to achieve in an environment that champions acquirement more than generosity. We do not need all the things. We are not lesser people because we do not have all the things. And having all the things does not make us better people.

But help — helping and receiving help — has enriched my life in so many ways. It's all that they say about paying it forward and more.

No, we won't turn the world into one great big snuggly ball of love and goodwill overnight. We can start small and make kindness and helping others something that we do day after day after day until it is a habit that comes naturally. I believe that we can do it.

I have to believe that we can do it because I'm so tired of all the bad news. It grows, feeds upon itself, becomes normalized from our Facebook feeds and 24-hour news shows into our daily actions. We don't have have opposable thumbs and free will so that we can be horrible to one another. We are capable of great things. And, like it or not, we are all leaders because someone is always watching and learning from our actions. What kind of lessons do you want to be remembered for teaching? 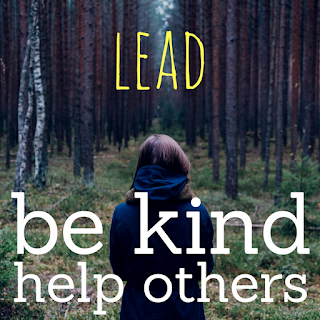